The ads by the Yes on 55 campaign paint a dark picture. They cite past spending cuts that led to thousands of teacher layoffs, eliminated art and music programs and increased class sizes a few years ago.

California, the ads claim, doesn’t have to repeat history.

We wondered whether the choice is that stark: Does California really face $4 billion in new school cuts if Prop 55 fails?

Our research
Before diving in, here’s some background on the temporary tax increase Prop 55 asks voters to extend.

In 2012, California voters approved Prop 30, which was promoted as a temporary solution. That measure raised income tax rates on high-income residents and sales tax rates through 2018 to pay for schools. Supporters at the time described it as a way to stave off additional deep education cuts from the state’s financial crisis and Great Recession.

Prop 55 asks voters to continue that higher income tax rate for 12 additional years, through 2030, but not the sales tax increase. It would apply to earnings more than $250,000 for single filers and $500,000 for couples.

If the measure fails, the higher income tax rate would phase out in 2018.

Less money for schools?
There’s no doubt the failure of Prop 55 would result in less money for public schools. The California Legislative Analyst’s Office projects Prop 55 would raise between $2 billion and $4.5 billion annually for K-12 schools and community colleges, depending on the economy.

But even if Prop 55 fails, school funding would continue to increase through 2019-2020, according to Department of Finance figures. That’s in part because revenue from Prop 30 continues through the 2018-2019 fiscal year. It doesn’t run out right away.

By 2019-2020, however, school costs would outpace total revenue by $4 billion, based on the end of Prop 30 and expected inflation, according to the state Department of Finance and an interview with Ana Matosantos, the department’s former director.

Matosantos supports Prop 55 and spoke in favor of it at a recent public forum.

“Costs will rise faster than funding,” Matosantos said in the interview. “The big issue is inflation.”

Competing outlooks
There could be even greater pressure on school funding under one financial outlook, Matosantos said. That’s because the state projects a separate $4 billion operating shortfall for the 2019-2020 fiscal year. That deficit is cited in the state Department of Finance’s multi-year budget outlook, and would account for the rising costs of everything from prisons to debt payments to health care, she said. 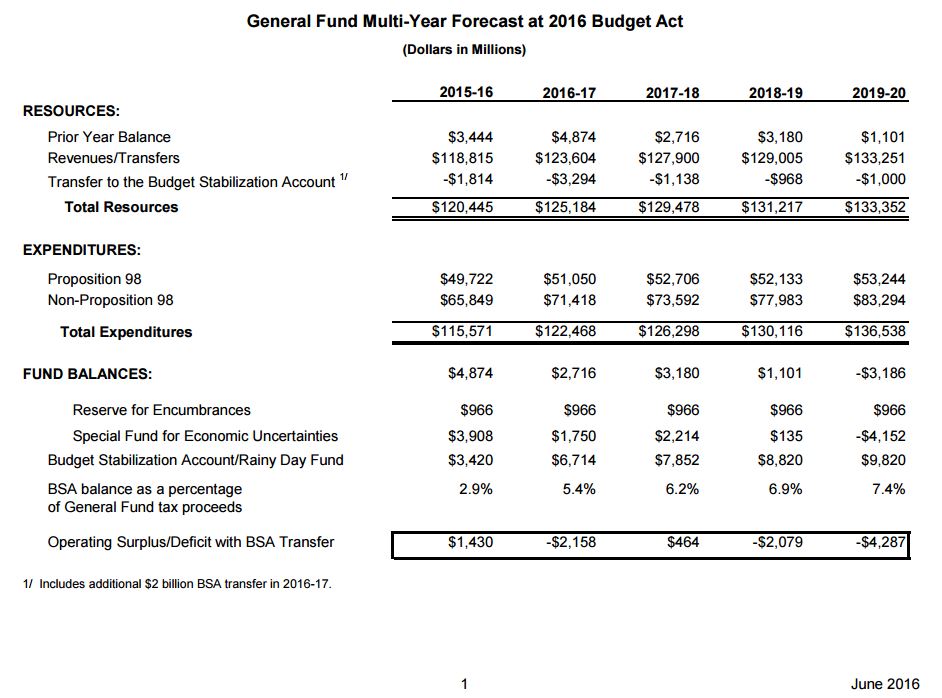 There’s no specific law that would require the state to cut school spending to close these shortfalls. It could take money from other services. But more than likely, Matosantos said, schools would experience cuts.

Not everyone sees a bleak financial forecast. 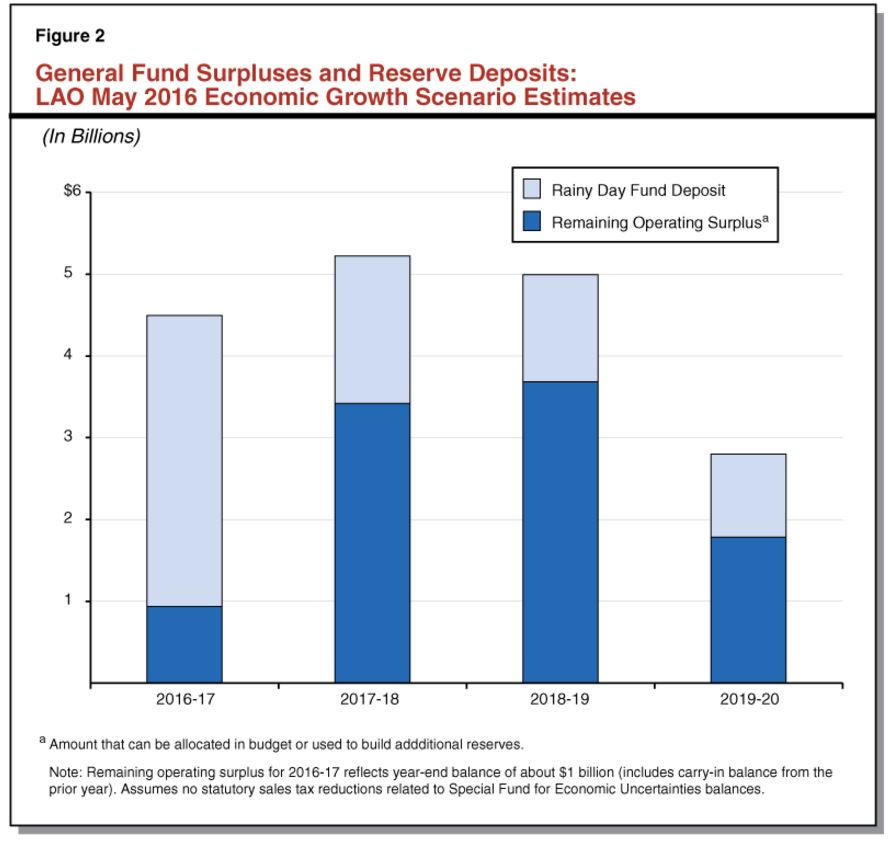 The Yes on 55 campaign “is using the figures that are convenient to them,” said David Wolfe, legislative director for the Howard Jarvis Taxpayers Association. Wolfe spoke against Prop 55 at a recent forum.

Steve Boilard, a Sacramento State University political analyst, expressed skepticism earlier this year over some Yes on 55 statements, including the campaign’s earlier claim in May that the measure’s failure could lead to $5 billion in cuts to schools.

“Looking at the numbers, I can see how they come up with dollar amounts that they do,” Boilard, who spent years crunching budget numbers for the state’s non-partisan Legislative Analyst’s Office, said in a Capital Public Radio article, at the time. “But I think it’s framed in a way that seems much more dire than it should otherwise be interpreted.”

A Sacramento Bee fact check recently rated the Yes on 55 claim as “iffy.” It found “the ad’s warning of $4 billion in cuts if the measure does not pass relies on an optimistic assumption of how much money the tax will raise, as well as an overly simplistic characterization of school funding estimates.

Our ruling
The Yes on 55 campaign claimed in recent ads that “Prop 55 prevents $4 billion in new cuts to our schools.”

There would certainly be less money for schools if the tax extension fails.

But the advertisements say nothing about the fact that Prop 30 was a temporary measure, and that its revenue was not promised forever. Nor do they mention that school budgets will continue to go up for several years until the Prop 30 revenue runs out after 2018.

Supporters of 55 point to an estimated $4 billion school funding deficit by the 2019-2020 fiscal year, if the measure fails. They also cite a separate $4 billion operating shortfall for all its services by the same year.

Another respected financial outlook, however, projects a $2 billion operating surplus for California that same year. That estimate paints a very different picture.

If the ads had said Prop 55’s failure could lead to eventual school funding hardships, years from now, they would have been more accurate.

But they leave the impression that the measure’s failure will lead to deep school cuts much sooner. And that’s not the case.

We rate the Yes on 55 claim Mostly False. MOSTLY FALSE – The statement contains some element of truth but ignores critical facts that would give a different impression.