The new CalPERS president, Priya Mathur, lost her board seat this week, defeated by a Corona police sergeant, Jason Perez, who wants to shift the $360 billion investment fund toward higher yields that secure pensions with less focus on social issues.

Mathur, a Bay Area Rapid Transit District analyst serving on the board since 2002, rose to the leadership post in January. The first female CalPERS president was chosen by board members to replace Rob Feckner, president and public face of CalPERS for a dozen years.

The CalPERS president, one of 13 members of a powerful board that sets annual rates that must be paid by government employers, has the power to appoint board committee members and approve board member travel requests.

In a typical low-turnout CalPERS board election, only 16,364 votes were cast by the roughly 400,000 eligible local government members, said Brad Pacheco, CalPERS spokesman. The turnout of about 4 percent was below the 6.8 percent in the last election four years ago.

Perez received 9,209 votes (56.78 percent) and Mathur received 7,008 votes (43.22 percent), a CalPERS announcement of unofficial returns said yesterday. Feckner and Theresa Taylor were re-elected to the board without opposition.

“My only goal is to make sure the board will direct the staff to make risk-adjusted investments,” Perez said yesterday. He became known for attending CalPERS board meetings last year to urge a tighter focus on maximizing investment returns. 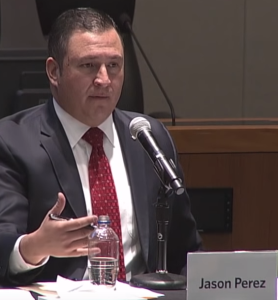 “Priya Mathur was elected to the CalPERS Board 15 years ago, and the unfunded liability has grown to over $100 BILLION,” Perez said in the CalPERS voter booklet. “Mathur has failed CalPERS and put our retirement security at risk due in part to environmental, social, and governance investing priorities, regardless of the investment risk.”

CalPERS has been a long-time leader among international institutional investors in pushing environmental, social, and corporate government policies, often abbreviated as “ESG.” Backers say they protect long-term investments and make them “sustainable.”

“Mathur is out of touch, believing her role is to fly around the world, ringing the bell of the London Stock Exchange and hobnobbing with United Nations officials,” Perez added in his campaign statement in the CalPERS voter booklet.

Perez won’t join the board until January. The independent 13-member board, under a constitutional amendment approved by voters in 1992, has sole control of the nation’s largest pension fund that covers about half of all California non-federal government employees.

Six board members are elected by active and retired members, two appointed by the governor, one by the Legislature, and four are state officers: treasurer, controller, human resources director, and personnel board representative. 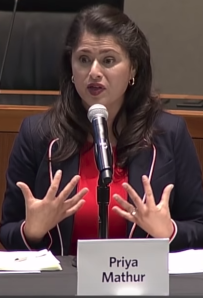 Perez won the “public agency” seat representing cities, counties and special districts contracting with CalPERS for pensions. After a huge loss in the financial crisis a decade ago, CalPERS only has about 71 percent of the projected assets needed to pay future pensions.

Cities like Corona are hard hit by soaring CalPERS rates. In the next seven years, city rates will increase more than 50 percent, reaching 15.8 percent of the average general fund, nearly double 8.3 percent a decade ago, a League of California Cities study said in February.

Last December another incumbent board member, Michael Bilbrey, was defeated in a runoff by Gretchen Brown, who has clashed with Marcie Frost, the CalPERS chief executive officer.

Brown and J.J. Jelincic, a former board member at odds with staff who did not run for re-election last year, both endorsed Perez. Mathur was endorsed by major public employee unions, such as SEIU and AFSCME, and four board members: Feckner, Taylor, David Miller, and Ramon Rubalcava.

Perez was endorsed by at least 17 local law enforcement groups and the California Association of Highway Patrolmen.

Board members had been routinely re-elected in recent years. Jelincic, a long-time CalPERS investment officer and former state worker union president, said the last defeat of a board incumbent before Bilbrey that he can recall was more than two decades ago.

Asked for his take on the ousters of Mathur and Bilbrey, Jelincic said: “I really don’t know, but I think the board has got to figure out that something is going on and the status quo isn’t going to keep working.”

Jelincic said he is considering running for the CalPERS board seat representing retirees, now held by Henry Jones. Perez said one of his “biggest supporters” was the Retired Public Employees Association.

Only active workers were eligible to vote for the public agency seat. But the retiree association has an experienced campaign organization, which helps boost retiree turnout in other board elections.

Perez was endorsed by at least 17 local law enforcement groups and the California Association of Highway Patrolmen. He said members of his “team” appeared at campaign events around the state that he was unable to attend.

The sergeant, who remained on duty, said he spent roughly $25,000 on the campaign, mostly for travel on weekends. He said his campaign manager was Donna Snodgrass, a Retired Public Employees Association official who ran unsuccessfully for a vacant CalPERS board seat in 2011.

CalPERS has made a number of attempts to increase voter turnout in board elections, including the unusual steps of allowing voting by internet and telephone.
—
Editor’s Note: Reporter Ed Mendel covered the Capitol in Sacramento for nearly three decades, most recently for the San Diego Union-Tribune. More stories are at Calpensions.com.

Advertisement
Tweets by @Capitol_Weekly
Support for Capitol Weekly is Provided by: