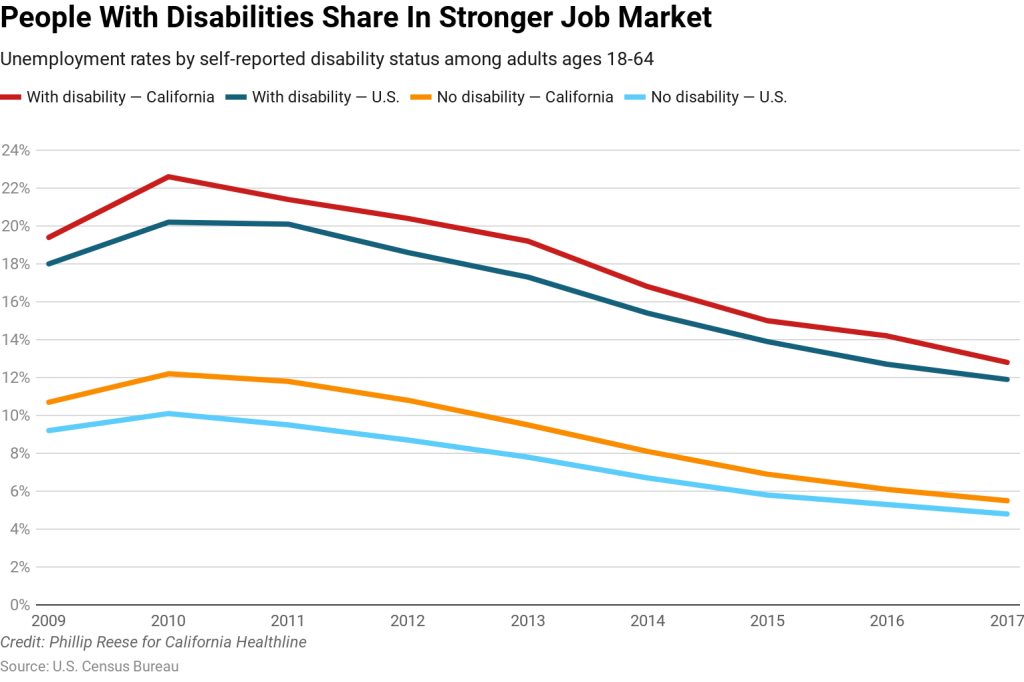 In a similar vein, the unemployment rate among Californians, ages 18 to 64, who self-identify as having a disability dropped from 19.4% in 2009 to 12.8% in 2017, according to the U.S. Census Bureau’s American Community Survey, an annual review of more than 3 million U.S. households. A less comprehensive Census Bureau survey — the monthly Current Population Survey — indicates the trend continued in 2018.

The current job market is driving much of the trend. After more than 100 consecutive months of job gains, the unemployment rate nationwide was 3.6% in May, the lowest rate in more than 50 years. As most everyone finds it easier to get a job, so do workers living with disabilities.

Americans with a work history and a qualifying disability expected to last at least a year are eligible for Social Security disability benefits. To get approved for those benefits, workers generally must show evidence from a doctor that they have a disability that prevents them from performing the kind of work they did before and makes it difficult to transfer to a different type of work.

Disabilities that qualify for Social Security encompass a broad range, from traumatic injury and chronic back pain to asthma, depression, various forms of cancer and neurological disorders, such as cerebral palsy and multiple sclerosis.

Before the sudden downturn, the ranks of workers filing disability claims had been climbing for decades. The Social Security Administration’s disability payroll roughly tripled from 1990 through 2014, peaking near 9 million. 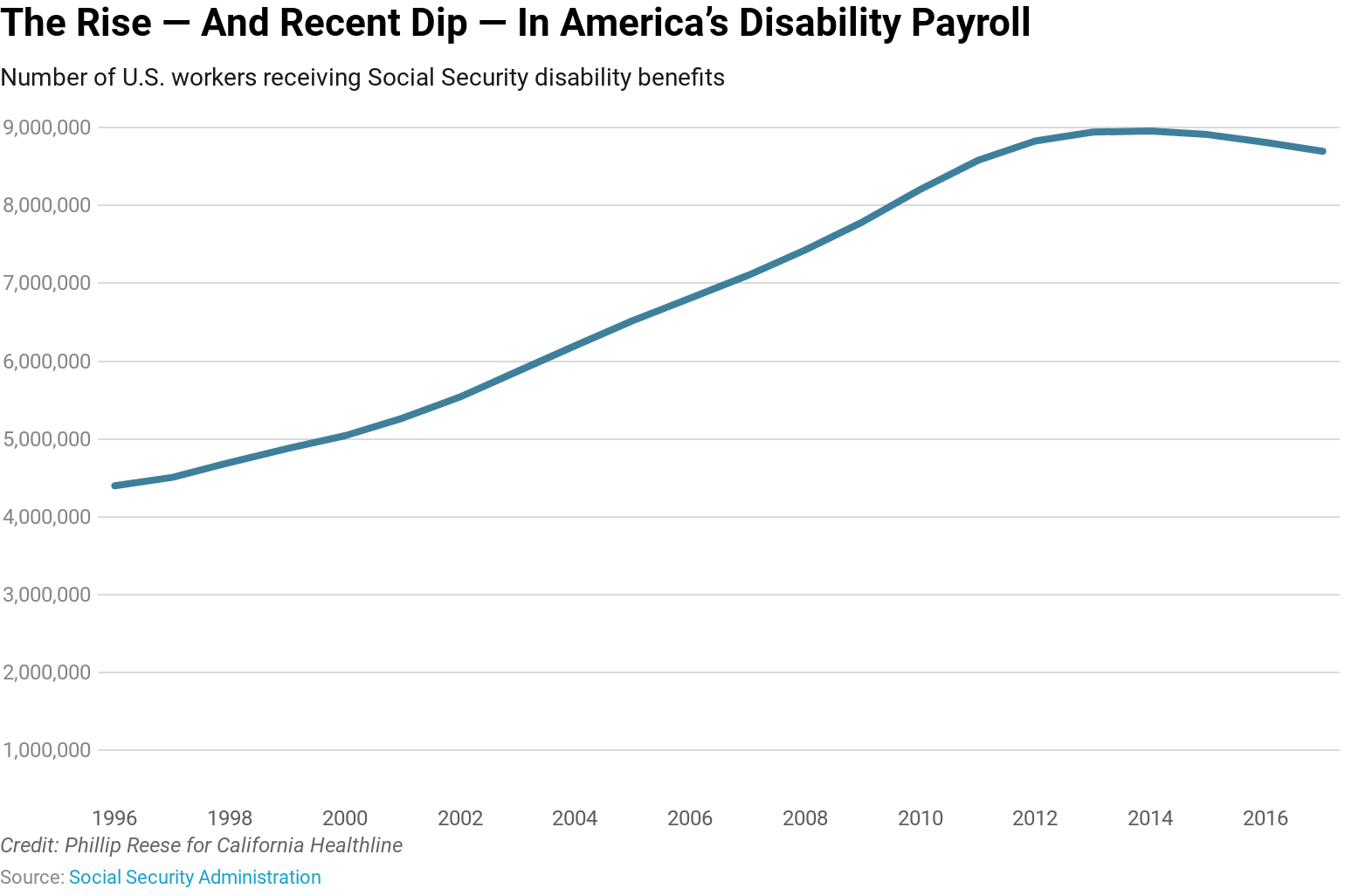 The notable rise in disability claims during the nation’s Great Recession prompted concerns about the program’s solvency. It also led to investigations of a system that critics said was ripe for abuse, making it too easy for workers without disabilities to get approved for benefits. In recent years, the Social Security Administration has tightened monitoring of disability claims by more closely supervising the judges responsible for hearing appeals from workers whose claims are rejected.

The tighter supervision has played a role in the recent drop in disability enrollment, according to several labor experts. As have demographics: Workers are more likely to develop a disability as they age into their 50s and early 60s. As millions of baby boomers moved through that age range, disability numbers swelled. Now, a large swath of baby boomers are 65 and older and can get Social Security retirement benefits instead.

But the biggest reason for the shrinking disability roll is the healthy economy, said Kathleen Mullen, an economist and director of the Rand Center for Disability Research.

Whether someone with a disability can work often depends on two factors, Mullen said: their health and whether employers will make the necessary accommodations to hire them.

Mullen also said technological advances and a cultural shift toward a “gig economy” have made it easier for people with a broad range of disabilities to work from home and keep flexible hours.

As part of two recent field surveys, Mason Ameri, an assistant professor of professional practice at Rutgers Business School, sent out thousands of job applications featuring highly qualified applicants who are living with a spinal cord injury, Asperger’s syndrome or other conditions. He found that applicants for jobs that involved significant face-to-face interaction drew less interest from employers if they disclosed their condition.

But for those people applying for jobs in software development and data entry that do not require much face-to-face interaction, “we found no evidence of discrimination,” Ameri said. “Technology has become a mediator.”

Shaylin Bautista-Vega worked as a preschool teacher before a progressive neurological condition greatly affected her life. She has been in a wheelchair for the past month or so, and stopped working several months ago.

“It’s very hard to find employers who are willing to do accommodations,” said Bautista-Vega, who is in her 20s, while at a May rally for disability rights at the California Capitol. “A lot of times, they assume something is wrong with your character.”

Mark Rodriguez, 30, is blind. At the same rally, he said employers often discount the capabilities of people who are blind. Rodriguez does not have a job. Asked what sort of work he would like to do, he said he would like to work in a call center, but, “I haven’t found the opportunity.”

Ameri, the Rutgers researcher, said people with disabilities often have trouble finding work because they can’t find adequate transportation or a job that accommodates their therapy schedule and other needs. Many employers also make incorrect assumptions about what it will cost to accommodate someone with disabilities.

But as more people with disabilities are integrated into the workforce, the easier it will be to overcome that stigma, he said.

“The more exposure you have to a stimulus that may be foreign to you, the more open-minded you become,” he said. “I do find that things are improving, and I am super optimistic about what is to come.”
—
Editor’s Note: Phillip Reese is a data reporting specialist and an assistant professor of journalism at California State University-Sacramento. This KHN story was first published on California Healthline, a service of the California Health Care Foundation.